October 19, 2013 / johan / Comments Off on BITB raise the roof at Newcastle concert 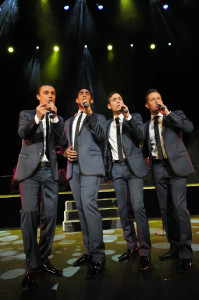 Boys In The Band raised the roof at Newcastle West Leagues for their first concert show following their successful two week season at The Joburg Theatre in South Africa.

The crowd were one of the best Australian audiences yet, and many loved hearing them earlier that day on local radio station 2NURFM where they were interviewed and did a special acapella performance. The boys were inundated after the show signing CD’s and posing for photos.